Group of European Pensioners From Savings Banks and Financial Institutions

The hotel has the added advantage of being situated near the most important areas of the city, enabling guests to reach main touristic and business attractions by foot#by public#private transport. They can also visit the famous comercial, leisure and entertainment areas in La Coruña. The hotel is ideal for discovering this magnificent region, situated right on the Sea Front, in front of the fantastic beaches of Orzán and Riazor. It also has a large, glazed and luminous entrance hall, car park, free internet connection, a wide range of facilities and a high standard of quality in their services.

Panoramic sightseeing tour through the Old Town of La Coruña,#the Royal Dockyard, we will start our tour by foot where we will first visit the Church of Santiago, the Azcárraga Square, the Collegiate Church of Saint Mary, the Square of the Barbarian and the Saint Charles Garden in the María Pita Square. We will then do some panoramic sightseeing of the Castle of San Antón, the Ría of La Coruña, which is one of the many inlets of the North Coast, and the tower of Hercules. We will then proceed to the Orzán and Riazor beaches, afterwards to the Obelisco Millenium and finally to Mount San Pedro where we will visit the gardens and enjoy some spectacular views of the city.

In the morning, we will start our tour by visiting the most important monuments of the city of Santiago de Compostela. This trip will be focused on the Cathedral and on the four squares that surround it: Obradoiro Square (San Jerónimo College, the Catholic Kings Hostal, the Parador, the Raxoi Palace and the San Fructuoso Church), Platerías Square (the Treasure Façade, the Casa del Cabildo, the fountain of horses), Quintana Square (San Paio de Antealtares Convent, Casa de la Conga, Casa de la Parra, the Royal Port and the Holy Port) and the Azabachería Square (Chapel of Corticela and the Monastery of San Martín Pinario). We will discover the inside of the Cathedral (entrance ticket included): The Pórtico of Glory, The Main Altar, pilgrimage rituals (embracing the Apostle and the crypt), Absidiales Chapels. We will then have a rest on the bus whilst we are driven to the restaurant Pazo Vista Alegre, where we have arranged to have our meal. This place has been declared a Historic Artistic Monument. It is a 16th century manor house, which was once home to some of the renowned families of La Coruña who are mentioned in the interesting book “Pazos and linages of the Province of La Coruña” written by J. Barbeit.

In the afternoon, we will explore the typical arcaded streets which are called “rúas” (rúa do Vilar and rúa Nova) contemplating the Casa del Deán, the Fonseca college (the University), the do Toural Square, the University Square, the San Fiz of Solovio Church, the Market, the Church and convent of San Agustín, the Canton de San Benito, the Cervantes Square and the Casa de la Troya.

The Pazo de Mariñán, dated#the 17th and 18th century was declared a Historic and Artistic monument. This palace has one of the most important French-style gardens in Spain. There, we will find the box tree, with both floral and heraldic motives; the rose garden, one of the first eucalyptus introduced to Europe, the Caucus fir tree; the Lawson cypress, the tree of Jupiter and the black bamboo.

Afterwards, we will make our way to the mouth of the river Eume where we will find Pontedeume, the strategic place for the feudal lords and especially for the Andrade family as they made this town their own base#which they exerted their huge power. Legend has it that they built 7 bridges, 7 churches and 7 castles, part of these buildings can still be found today in Pontedeume. We will visit the Tower of Andrade, its typical medieval “rúas” (arcaded streets) and the great Church of Santiago. 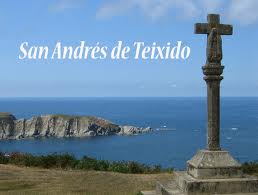 We will begin our excursion by discovering the most important monuments of the city of Ferrol, a city whose development dates back to the 18th century with the construction of the military Arsenal and of important shipyards. In the populous neighbourhood of Magdalena, we will find one of the best examples of neoclassic urbanism (Church-Cathedral of San Julián, Church of Help) and the eye opening modernist buildings. The tour will be completed with a panoramic view of the Ría of Ferrol (inlet), where we will be able to contemplate the harbour facilities, the shipyards and the defensive buildings. Later on, we will make our way to the North coast and witness some of the most beautiful landscapes in Galicia such as the Valdoviño and Vilarrube beaches before arriving at the seafaring village of Cedeira, where we have arranged to have lunch in the restaurant “Badulaque”, affording some fantastic sea views.

In the afternoon, we will head to the wildest coast in Galicia where there are some  impressive cliffs which are 600m above sea level. It is there where we will find the Sanctuary of San Andrés de Teixido, one of the most visited in the area and as the saying goes "He who did not go during his life to San Andrés de Teixido will go in the afterlife". We will have the opportunity to contemplate the wonderful views of the Atlantic Ocean, the little sanctuary and the Holy Fountain, all of which are filled with mysterious legends.

The peninsula of As Mariñas separates the Rías of La Coruña and Betanzos. Because of its outstanding landscape it has been, throughout history, home to the Galician aristocracy (Pazo de Meirás). There are sheltered beaches all over the coast, such as Bastiagueiro and Gandarío, right up until we get to Betanzos, known as the "city of the knights" as it was one of the most important medieval cities in Galicia, land and estates belonging to the Andrade family, it has an extremely important monumental factor such as the Gothic Churches of San Francisco and Santa María, the Church of Santiago and the Do Campo Square.

Situated near the river Miño, the city of Lugo still keeps important reminders of it Roman past, such as its Millenary Wall, declared a World Heritage Site by UNESCO. Inside the city, there are serene pedestrian streets, huge squares and garden areas, where some buildings really standout like the Cathedral, the Archbishop’s Palace and the City hall. However, the old part of the city also has some of the best restaurants in Galicia. We will visit this area by foot, making our way towards the the 3rd century wall (declared a World Heritage Site by UNESCO in 2000), the Santa María Square (Episcopal Palace), the Cathedral (permanent exhibition of the Great Saint, the Chapel of Nuestra Señora de los Ojos Grandes, the Choir stalls…), the Campo Square (Ancient Roman Forum), the Franciscan Convent, the Santo Domingo Square (bimillenary Foundation Monument), the Alameda and the City hall.

During the afternoons of the half day trips (Saturday 18th, Monday 20th and Wednesday 22nd) the following meetings will take place:

- Board of Directors. Delegates meeting
- Work and Study Group meeting (GET)
- General Plenary Assembly of the European Group

End of our services. Transfers to the airport for those who have made transport arrangements.

Members of affiliated associations of the European Group

The total amount of available spaces is limited. Reservations will be confirmed on a first come first serve basis.
Reservations: Spaces are subject to availability.

PRICES: Prices have been calculated based on exchange rates, transport fees, fuel costs, taxes and the Spanish VAT 01/09/14. Any changes on these rates may be checked and passed on to the customer in accordance to current regulations and general conditions included in this current offer and appendices (article 157 RDL 1/2007).